How powerfull is Appleseed compared to Cycles?

Without defining what powerful means for you it is difficult to give an answer.
I can state you some differences between Cycles and appleseed. This is not a full comparison, just some key points.

Cycles is developed by paid developers and lots of other contributors, our developer base is smaller. Cycles is more feature rich (light portals, IES lights, hair shader, curve system etc…) and has matured to a viable alternative to commercial engines.

appleseed is mainly geared towards animation/vfx but also values exact light transport and precision for industrial use cases.

From a Blender user point Cycles has obviously the best integration into Blender. External render engine developers don’t have the same comprehensive access to Blender’s internal functions as the Cycles devs have.
appleseed cannot be optimized for only one DCC platform, we need to support also 3ds Max, Maya and Gaffer in equal fashion. While there exists ports of Cycles to Max, C4D and Gaffer, their usability and features cannot compare to the one integrated in Blender.

By powerful i mean which one have best production quality render engines.thankyou for the reply.

By powerful i mean which one have best production quality

Production quality is also something not very well defined without further information.

Here is a comparison of a commercial product viz project with appleseed and Cycles from the artists point of view.
https://forum.appleseedhq.net/t/battle-against-ycles/667

If you mean production quality in terms of feature completeness then Cycles wins hands down.

If you are referring to image quality that is fairly subjective. Both Cycles and appleseed have exceptional image quality. My own opinion is that color reproduction appears more saturated and visually appealing in appleseed, but that’s hardly scientific.

Speed wise, Cycles is faster to render in almost all situations, at least until deformation blur is used. While Cycles’ Embree integration has helped with that, appleseed still seems quicker.

Just today, I played with alpha maps.
A test scene reveals, there is a massive performance difference in Cycles and Appleseed if I use alpha maps.
Comparing with Cycles, Appleseed renders test scene nearly 9 times (!) faster. 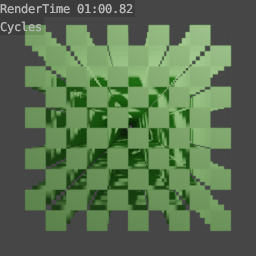 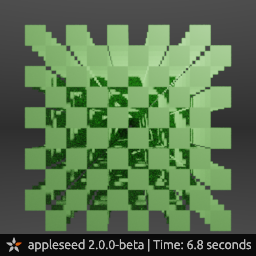 Totally agree with Jonathan_Dent about the subjective nature of image quality. I like to add to that with the ever precious thing called time. Getting that subject look in a set amount of time is often key for production jobs on a deadline.

It is difficult to measure speed. Cycles needs more Samples, but Samples are over all faster in Cycles.
I try to estimate how many samples are needed to get similar image noise levels. 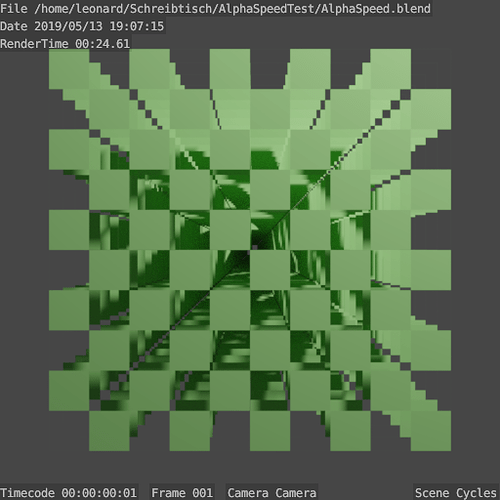 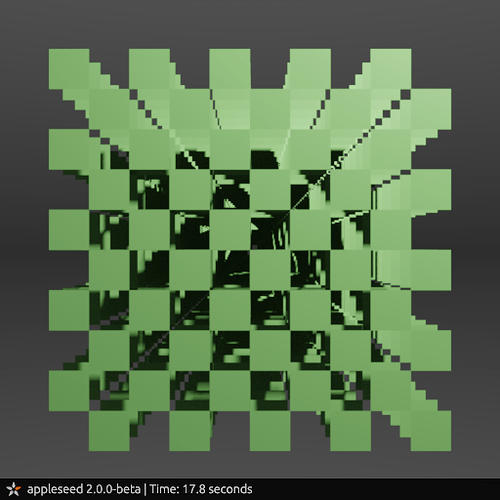 It looks like Appleseed needs less Samples to get a good noise level.

Same test with Appleseed, 150 samples (not sure … its still not as noisy as the other render)

Maybe I do a misstake …
I try to adjust noise levels by sample count. Cycles loses performance if alpha maps are used.

Thanks for the detailed testing Leonard!

indeed, interesting that transparency has such a speed impact in Cycles. Recently Alpha inputs were added to Cycles Principled BSDF which may lead to better speed when using transparency. https://developer.blender.org/D4848

Hi Herbert, thank you for your note. I did not notice Brechts commit. Need to wait, but it will be interesting to see if something changed.

Now its in the daily build. Alpha input for PrincipledBSDF probably does not make that much difference.

appleseed has very fast alpha cutout rendering thanks to Fetch. I managed to find a presentation Franz gave back in 2015 where he mentioned that was one of the major development goals for that project.

Edit: You should have seen Cycles back when it first came out. It’s alpha map rendering was HORRIBLY slow then.

Edit: You should have seen Cycles back when it first came out. It’s alpha map rendering was HORRIBLY slow then.

Mh … I did not notice. That time I probably had an old celeron box

Anyone lose hair, if he dares to render something on this machine.