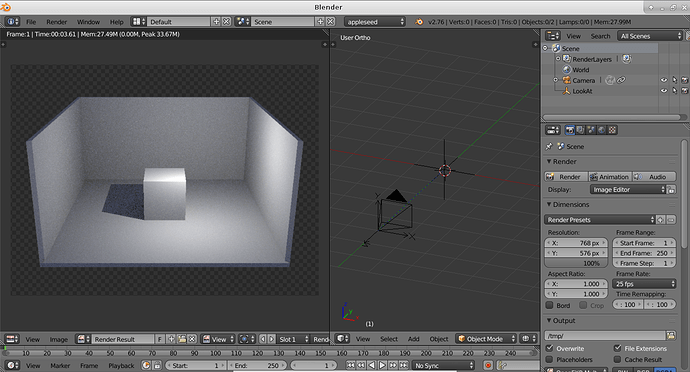 Just curious. Is this a new exporter, or is it building off Joel’s existing one?

appleseed-blender (new addon name) is new, but it’s also reusing code from Blenderseed and I’m including Joel and Franz as authors in the copyrights of the source files.

The addon works in a different way. It uses appleseed.python instead of generating appleseed project files. That makes it a bit difficult to build it on top of Blenderseed.

That’s great that it’s being worked on in any case.

appleseed-blender is also part of a bigger initiative of ours, which aims at providing modern, user-friendly, feature-complete integrations of appleseed into three major DCC apps: Maya, 3ds Max and Blender.

This is pretty awesome! One of the most frustrating things about rendering via blenderseed was the always inordinate mesh export time, but of course this is true of every pure Python exporter writing .obj’s. How is this translating meshes and how long does it take on heavy scenes?

The addon uses appleseed.python, to construct a scene in “memory” and render it directly, instead of generating appleseed project and obj files, and render them using appleseed.cli.

Mesh export is not implemented yet but I expect it to be faster.
Using appleseed.python we don’t need to export meshes to disk and reload them at render time, so both export time and the time to the first pixel will be lower. The render view is also more responsive now because we can pass the pixels directly to Blender without intermediate image files.

The addon is progressing slowly. I’ve been very busy lately with work, travelling and other things, but I think I’ll have more time near the end of the month to finish some missing parts and try to make a development preview release.

I’m still very fond of appleseed, just haven’t had an opportunity to use it in quite a while. I’m curious if there will be any further work on the appleseed-blender plugin in the near future?

We have no plans to work on it in the near future.
An updated blender plugin is something that we’d really like to have,
but we don’t have the resources to do it now.

We’d be happy to help if someone is interested in continuing development of the plugin.