I’m new to both Linux and Appleseed- coming from a Houdini/Redshift background.

Trying to start Appleseed Studio by double clicking it produces an error that says “could not display” and that “there is no application installed for shared library files.”

If I try to run it in terminal I get “error while loading shared libraries: libIlmImf-2_3.so.24: cannot open shared object file: No such file or directory”

I have no idea what that means! Any help would be greatly appeciated.

Welcome to our forum!
Houdini and RedShift is a powerful combination

Unfortunately we don’t have an appleseed Houdini plugin.

Your problem seems related to a shared libraries mismatch. libIlmImf-2_3.so.24 is part of libopenexr24 in Ubuntu 20.04 LTS and seems to be picked up by appleseed (which uses also OpenEXR, but version 2.3) . My guess is by uninstalling libopenexr24 the problem will disappear.

thanks! I’ll give it a shot!

And Houdini integration would be nice, but I plan on using GafferHQ to manage big shots that combine assets from Houdini and Maya. Want to kick the tires on AppleSeed before I jump into Gaffer too much.

alrighty, so it turns out libopenexr isn’t installed (any version!)

I installed 2.3 and now I’m getting that ‘libOpenColorIO.so.1’ isn’t installed!

Starting to think I’m just missing a collection of libraries. This is a fresh install of Linux (only a few days old). Is there a repository I can get to that will install all the pre-reqs for AppleSeed?

When you download the last official release version for Linux then the shared libraries are included
https://github.com/appleseedhq/appleseed/releases/download/2.1.0-beta/appleseed-2.1.0-beta-0-g015adb503-linux64-gcc74.zip

If you are more adventurous you can compile the latest appleseed sources on your system.
There had been many additions since the last official release.
Detailed instructions are here: https://github.com/appleseedhq/appleseed/wiki/Building-appleseed-on-Linux
For this we have also a collection of pre-compiled dependency packages:
https://github.com/appleseedhq/linux-deps/releases

Thanks! I’ve deleted gaffer and re-downloaded that archive.
I’ve just extracted it in my downloads folder. I navigate to downloads/appleseed/bin and open a new terminal session then enter “./appleseed.studio” but I’m still getting an error.

I must be missing something! Any idea?

Hi Stephen,
I think there is a slight misunderstanding. The download links above are for appleseed core (render engine core) and appleseed.studio (a scene inspection and debug application, see screenshot below)
The Python error maybe resolved by setting export PYTHONHOME=/usr

Gaffer is a lookdev and render application which contains an appleseed render plugin). For Gaffer you don’t need to have a separate appleseed installation, it has appleseed already included and should work out-of-the-box!
Here is the latest release: https://github.com/GafferHQ/gaffer/releases/download/0.57.5.0/gaffer-0.57.5.0-linux.tar.gz

Just to recap, official releases of Gaffer and appleseed should work out-of-the-box, they come with all dependencies included. Gaffer does not need an additional appleseed installation, it has appleseed as a plugin included. 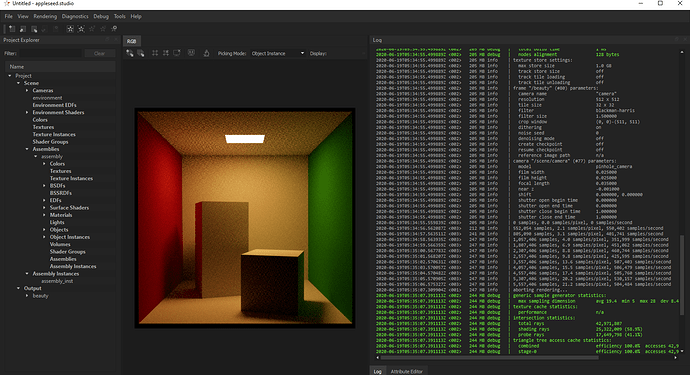 Like you said, it should work out-of-the-box but even after fixing that python error I still get the “error while loading shared libraries: libOpenColorIO.so.1: cannot open shared object file: No such file or directory”

libOpenColorIO.so.1 is included with the official appleseed release (see screenshot). Look in the appleseed/lib folder, it should be there.
If it is not present reinstall appleseed from the compressed zip file.